The left hind foot of a rabbit killed in a graveyard in the dark of the moon is a talisman of great virtue, and many are the intelligent people who carry such charms about their persons. —Times Picayune 1895

Voudou has been referred to as a fetish religion since the first enslaved Africans arrived at the Americas with their ritual objects and talismans in hand. The term “fetish” derives from the Portuguese word fetico, which originally referred to “any work of art or such man-made religious objects as talismans, amulets and mascots which Africans, encountered by the Portuguese on their voyages, made use of” (Anderson 2015, 18). Many of the regions from where slaves were bought and sold have specific names for their fetish priests and priestesses and their ritual objects; however, Africans tend to describe them as “Juju men” or “Juju women.” In New Orleans, fetishes are similarly referred to as “ju ju.” Current studies suggest that the use of the word fetish to describe anything African is derogatory (Anderson 2015). While I acknowledge this sentiment, my use of the term is restricted to descriptions of ritual objects, is appropriate in the context of New Orleans Voudou, and is in no way meant in a derogatory fashion.

Fetishes are regarded as “spiritual, intelligent beings who make the remarkable objects of nature their residence or enter occasionally into images and other artificial representations which have been duly consecrated by certain ceremonies” (Puckett 1926, 171). Thus, there are two main aspects of a fetish: first, the object which acts as a container; and second, the indwelling spirit. The spirit is the essential part of the fetish as it must be called into the object for the object to have religious utility. It should be noted that the fetish spirit does not always live in its specified container unless it is instructed to do so by the ju ju priest or conjure worker. Further, since fetishes are viewed as alive with spirit, they must be fed in order to thrive. Feeding a ritual object consists of providing specific offerings at prescribed times, such as soaking a mojo hand in whiskey on a Friday. Not knowing how to feed a fetish can result in a “talisman, after being the source of luck” becoming “the cause of ruin and misery” (Métraux 1959, 291).

Fetishes are described in the historical record, and we know through oral tradition that Marie Laveau often engaged in psychological warfare using doll conjure as a primary weapon. She would frequently create little dolls and place them on the doorsteps of enemies, and she used them to win court cases and to unite lovers, among other things. We also know dolls of various sizes and materials were present in Voudou ceremonies such as this one:

In the centre of the table there was a cypress sapling, some four feet in height, planted in the centre of a firkin or keg. Immediately behind the cypress, and towering above it, was a black doll with a dress variegated by cabalistic signs and emblems, and a necklace of the vertebrae of snakes around her neck, from which depended an alligator’s fang encased in silver. (Buel 1883, 524).

Here is a simple banishing spell that is believed to have originated with Marie Laveau. Marie Laveau’s bottle spell is simple, yet classic in terms of New Orleans Hoodoo. For this spell you will need:


On a piece of parchment paper, write the name of the person you want to leave. Attach it to the doll and stuff the doll into the bottle. Fill the bottle with Four Thieves Vinegar and seal it. Throw the bottle into the Mississippi River or any moving body of water. According to legend, Marie Laveau asserts that as the bottle is carried away by the water, so shall this person be removed from your location.

If you wanted to get easy money, it is believed that burning onion peels will do the trick. So, make a Voodoo poppet out of green material and stuff it with onion peels. Anoint with Fast Luck oil and burn the doll in a cast iron pot until it is nothing but ashes. Take the ashes and put them in a red flannel mojo bag along with a whole nutmeg and silver dime and carry it with you until you get your money.

Hold On To Your Money Voodoo Doll Spell

This Voodoo doll spell is designed to keep you’re your money from burning a hole in your pocket. Make a Voodoo moss doll and stick some sprigs of thyme in the moss. Wrap with blue fabric. Pray Psalm 113 for nine days in a row and repeat monthly as long as spending money is an issue for you. Display the doll prominently in your home where it will be a constant reminder for you to change your spending habits. You can use the same doll to repeat the spell until your behavior is changed.

Damballah Wedo Do As I Say Spell

The snake is highly revered in New Orleans Voodoo, with most Voodoo temples and houses possessing their own boa constrictor or python used for ceremonial purposes. Marie Laveaux publicly danced with her snake known as Li Grande Zombi in what is now Congo Square in New Orleans. The snake is called upon for many purposes, including transformation, transcendence, ancestral knowledge, righteous retribution, and wisdom. Damballah Wedo is likened to St. Patrick, the Catholic patron saint of Ireland.

This spell is designed to help you sway a person in a particular direction. Here are the items needed for this spell:

Take three pieces of ribbon - one red, one yellow, and one black. Tie them together at one end and then knot them nine times. Each time you ties a knot, repeat the name of the person you are trying to influence.

Create a doll from red flannel and attach a photo of the person you are trying to influence. If you do not have a photo, then write their name nine times on a piece of brown paper with Dragon’s Blood ink and attach it to the doll. Insert a piece of High John the Conqueror root and the ribbon tied with 9 knots.

Draw the ritual symbol for Damballah and place it on a small table you have dedicated to this work. Alternately, you may photocopy the design and use the copy; though, your spell will be more powerful if you draw the symbol yourself. Set your doll on top of the symbol and concentrate on the person you are targeting. Chant the following 9 times:

Damballah, may I (your name)
come out victorious in dealing with (the person's name).

Anoint the doll with Damballah Wedo Oil. Keep in a box lined with Spanish moss and keep the box sitting on top of the ritual symbol. Repeat the ritual as often as necessary until the desired results are achieved. 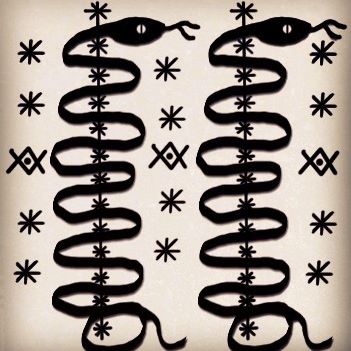 Fetishism in Voudou is not limited to dolls and wooden statuary. This aspect of the tradition often makes outsiders uncomfortable, and understandably so. Visitors to New Orleans will immediately notice alligator heads and paws, chicken feet, and bones of all sorts sold in curio shops. There
is a cultural and historical precedence to the use of these types of items in New Orleans Voudou, as it is a direct holdover from the African Ju Ju tradition. These items were often used to contain ingredients designed to conjure a person, condition, or situation and continue to be used in a similar fashion by modern-day practitioners.

For example, the beef tongue rite remains a popular form of conjure, as is the use of chicken feet. However, a major difference between past and present practices is that animal sacrifice and killing animals simply for their parts in ritual is no longer practiced by most New Orleans Voudou practitioners. While this shift has been the subject of controversy by traditionalists from other African-derived traditions, who tend to look down on New Orleans Voudouists who do not embrace animal sacrifice as part of their practice, I personally only use ethically harvested animal parts in my conjure and do not practice, condone, or encourage animal sacrifice or the ritual killing of animals for magical purposes. While Marie Laveau did practice animal sacrifice in the 1800s, it was a different time then, and I imagine beef hearts and tongues were more readily available than they are now. Her power was not and is not dependent upon the spilling of animal blood; it was always dependent upon her connection to Mother Mary, the spirits, the saints, and the Ancestors.

Beef Tongue Rite from the Boss of Algiers

The Beef Tongue Rite is performed when the goal is to silence someone who is gossiping or sullying your good name, or when you need to silence an opposing witness in court, among other things. It can also be used to curse someone, cause a separation or break up of a couple, or create general chaos and confusion in someone’s life. There are many versions of the beef tongue ritual, and Harry Middleton Hyatt was able to record a few in Hoodoo-Conjuration-Witchcraft-Rootwork, including this one from a woman referred to as the Boss of Algiers. Note that this working is not for the squeamish, especially if you do not cook from scratch and never work with big pieces of raw meat or identifiable animal parts. However, it is a very popular working and adherents swear by its effectiveness. For this rite you will need the following items:

The specifics of gathering grave dirt are given by the Boss Woman. She states you must go on the evening of a new moon at six o’clock and locate a grave that is of a murdered person, someone who drowned or otherwise died what might be considered a sinful or awful death. Once the grave is located, which will require some research beforehand, dig at least two inches in the breast area and gather 1 pound. In my opinion, a pound of grave dirt is a lot and not necessary, but make sure to get a good amount. Refer to my book, Workin’ in da Boneyard, for proper graveyard etiquette.

Take the beef tongue and place on a plate. Slice the tongue lengthwise down the center but do not slice through the tongue. You want it to remain intact and act as a container for the ingredients you will be placing inside it. You are essentially slicing a pocket into the tongue.

Next, you are going to draw a human form on a piece of paper to represent the target. If the target is white, use a red pen to draw the form and write the petition. If the target is black or brown, use a black pen. When you draw the form, include some identifying characteristics if any standout such as a head of curly hair or glasses if they wear them. Then, write the target’s name under the figure, and write it fifteen more times all around the figure for a total of sixteen times. Fold the paper up three times and stick it into the tongue. You should be focusing your intention the entire time you are doing this working.

Add the grave dirt, filet gumbo, peppers and Tobasco sauce inside the tongue. Then, take the pins and stick them all over the tongue. Some folks will use the pins to close the tongue, pinning one side to the other, alternating sides and crisscrossing the pins.

The last step is to take the appropriate colored thread and wrap it around the tongue, binding it up really good. Use the entire spool of thread to do this and tie securely. Place the tongue in a paper bag.