The Tomb of the Widow Paris

Marie Laveau’s final resting place is in a large tomb with a colorful history in St. Louis Cemetery No. 1, the oldest cemetery in the city. Because New Orleans is built on swampland, the Dead cannot be buried in the ground lest they resurface and float away. Consequently, all but the poor and indigent are laid to rest above ground in elaborate crypts, wall ovens and mausoleums. The decorative ironwork and sculptures adorn the plots, making the cemeteries resemble little cities; hence the nickname, Cities of the Dead. The cemeteries in New Orleans attract a lot of visitors each year because of their unique, historic character.

St. Louis Cemetery No. 1 is the most famous cemetery of the Cities of the Dead in part because of its architecture and history, and in part because Marie Laveau is buried there. When she was alive, people would go to her home on St. Ann Street and knock on her door to ask for help. In death, Voudou adherents from all over the world flock to her tomb for the opportunity to make a wish they hope will be granted by the Voudou Queen.

Referred to as the tomb of the Widow Paris, the tomb of Marie Laveau is more than just a tourist attraction, however. It is at the heart of New Orleans’ sacred geography. Since her internment in 1881, Marie Laveau’s tomb has been a powerful liminal space that has evolved over time into a pilgrimage site for devotees from around the world. It connects many sacred spaces running the gamut from swamps to churches, shrines, cemeteries, Congo Square, St. Louis Cathedral, Bayou St. John, and every home where someone lights a candle or says a prayer in devotion to the Voudou Queen. Just as the crossmarks drawn on her tomb mark the point where the world of the physical and the world of the spiritual intersect, her tomb signifies the place where people from all over the world meet and interact with the spirits of the Dead and the Voudou Queen herself.
Marie Laveau’s tomb is an integral part of her history because it functions as a sacred space for people to interact symbolically with her. Over the years, however, there has been some disagreement as to whether the Tomb of the Widow Paris is the actual resting place of Marie Laveau. Even though her obituary states that "Marie Laveau was buried in her family tomb in St. Louis Cemetery No. 1," there is an oven wall vault in St. Louis Cemetery No. 2 where locals insist she is buried. According to Long, the “Burial Book states (in English) that ‘Dame Christophe Glapion’ was placed ‘in the family tomb of Vve Paris on June 16, 1881” (2016 30). Even with this verified fact that she was interred in the Tomb of the Widow Paris, there remains disagreement as to where she is buried. That shows just how strong the local lore and legend remain.

…another supposed resting place of Marie Laveau. The uninscribed concrete is covered with crosses made by the faithful with bits of red brick; and devotees still bring contributions of food and money, especially on St. John's Eve (June 23). Hoodoo money, in two-cent and eleven-cent combinations, left at the base of the tomb will bring good luck to the depositor or bad luck to his enemy. Marie is said to converse with her followers through the walls of her 'oven,' imparting such information as they desire. (Works Progress Administration 1938) 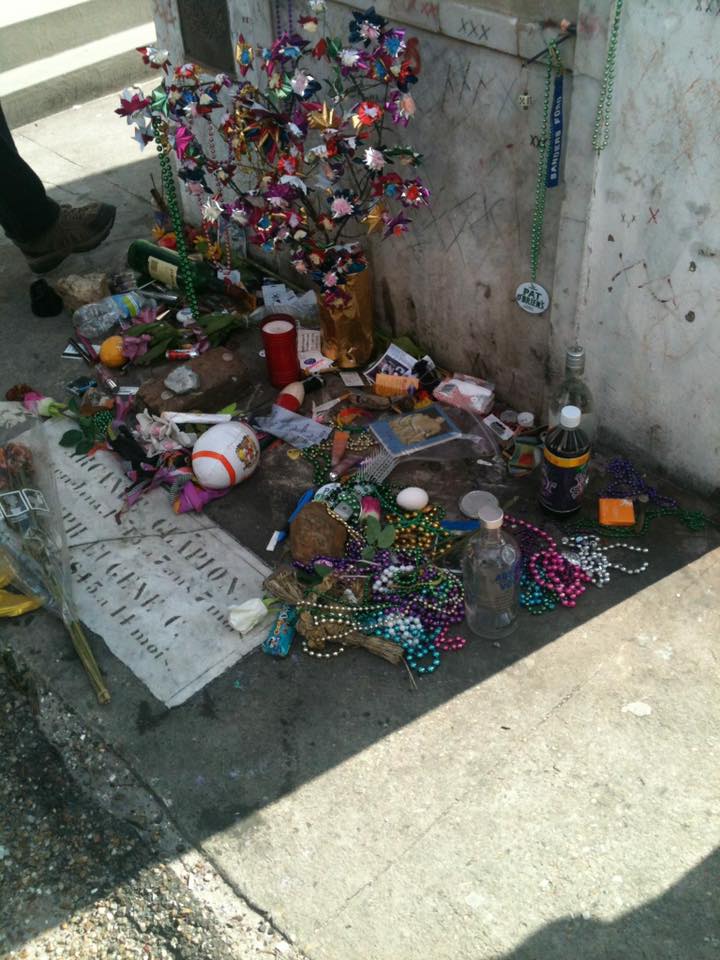 Offerings left at Marie Laveau's grave site. Photo courtesy of Russell Hamel.
Devotees have been leaving offerings and burning candles at both the St. Louis Cemetery No. 1 and St. Louis Cemetery No. 2 sites for years. In 1898, the Sun published an article about two Northern women who had come to New Orleans in search of Marie Laveau’s cottage and grave. The two were wandering around the French Quarter with guidebook in hand, searching for the Laveau home. When they found St. Ann St., they also happened upon a local woman named Marie Smith. Marie shared some colorful stories with them and claimed to have grown up right next door to Marie Laveau. She showed the women the Laveau cottage and then offered to take them to her grave site:

Dat’s a powerful ole house, dat is. Yessum. Dat house is older n my motheh . . . Marie Laveau sho was Injun, yo know. Yessum. Folks thinks she was cullud. Lawd, no! I was brought up right ‘longside o’ huh an’ I know. She was a great woman, sho was. Yo’ want me to carry yo’ ovoh to St. Louis Cem’tery an’ show you where she’s buried? The two Northern women said they would be delighted to be "carried” over to the cemetery . . . a few days later, they hunted up Marie for the promised trip to the cemetery. She “carried” them over, as agreed, to old St. Louis Cemetery, one of the landmarks of the old quarter. It is crowded with whitewashed tombs ten or twelve feet high, with tablets in front. Marie took her two travellers around to one of the best of the tombs and there triumphantly pointed out the Inscription (Sun 1898). 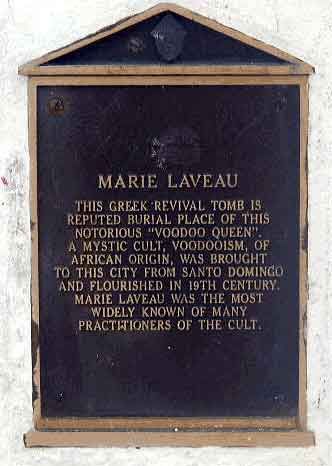 Once upon a time, travelers could visit her tomb on any day of the year to leave offerings, make wishes, and pay homage to the Voudou Queen. Tour guides began bringing sightseers there during the 1980s and, blessed with the gift of gab, many a story emerged from their colorful tales. All this changed, however, on December 24, 2013, when renowned occult author Dorothy Morrison wrote this on Facebook:

As grand a time as we’re having in New Orleans, we did make a rather disturbing discovery this morning: Someone painted Marie Laveau’s tomb . . . I can hardly bring myself to say this . . . pastel PINK!!! WTF??? Someone local: Please find out who did this and make them change it back! It’s disgusting, and I don’t think Madame is very happy about it.

A flurry of responses and reactions ensued, as you may well imagine. Most people expressed disdain, but a few did not find the color objectionable. “PINK!? OOOO SHEEET! Madam Laveau just got a barrio-style touch up!” said Absolem Yetzirah of Societe Bayou Ville, a temple dedicated to the service of Marie Laveau in Houston, Texas. He went on to state that he rather liked the color because it reminded him of the colorful tombs in some of the Mexican Catholic cemeteries. “What is the color pink in conjure work?” he asked. “Pink is associated with friendship, honor, love, morality, affection, spiritual awakening, unselfishness, leadership, femininity, togetherness, unity and healing . . . In the barrio traditions, pink is used to generate great affection. This is why you will see many tombs of grandmothers and mothers painted pink in the valley cemeteries” (Absolem Yetzirah, personal communication, December 24, 2013). 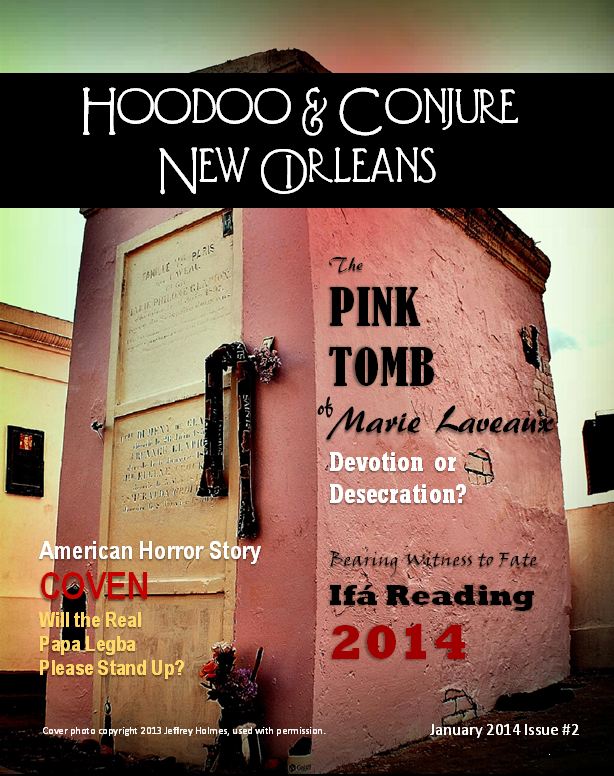 Even though the Archdiocese of New Orleans owns and operates St. Louis Cemetery No. 1, where the tomb of the Widow Paris is located, they did not routinely maintain the tomb. Most of the tombs in the cemetery are individually owned by families, who are ultimately responsible for their maintenance and upkeep. If there is no family, there is no upkeep. It is estimated that 75 percent of almost one thousand tombs in St. Louis Cemetery No. 1 are orphaned. According to archdiocesan records, Marie Laveau’s last known family member was buried in 1957, and since then no one has been responsible for taking care of the tomb. As a result, Save Our Cemeteries, the Archdiocese of New Orleans, and Bayou Preservation, LLC formed a partnership to restore the tomb. Nearly a year later, the restoration of the Voodoo Queen’s tomb was completed and unveiled on Halloween day, 2014.

Since it’s restoration, the primary concern was to prevent the same sort of inadvertent destruction of the tomb from occurring in the future. Some suggested partitioning the tomb off from the public altogether. As with all things Laveau, there are stories. One such story is recounted by Jack Barrett: “I don’t know how much is true, but there’s a story of a NOLA city councilman who wanted her tomb cordoned off with no public access, and who woke up one morning with his bedroom full of snakes. After that, he would encounter a cottonmouth everywhere he went, even finding them in his refrigerator” (Jack Barrett, personal communication, April 2019). Partitioning the tomb off was a wildly unpopular idea and instead the decision was made to make the cemetery no longer open access. If you wish to visit Marie Laveau’s tomb, you must now be accompanied by a tour guide in order to do so.