The Birth of a Queen

Marie Leveau was a negress of café au lait tint, handsome in face, commanding in figure, and of remarkable intellect and force of character. She masqueraded as a hairdresser, thus learning the secrets of many a proud old New Orleans family. In helping sweethearts to secret meetings and forwarding clandestine correspondences, she had no equal and cared not whether the men and women she aided were old in coquetry and vice or young and innocent. —Richmond Daily Palladium, 1900

It is impossible to predict where our descendants will end up as a result of our life experiences. Marguerite, Marie Laveau’s great-grandmother, was sold as a child from Senegal by African slave traders to Europeans and sent to the Americas in the belly of a slave ship. Who could have possibly known that as a result her great-granddaughter would become the leader of a new religion, elevate to the status of loa after death, and be revered globally?

Not much is known about Marguerite, but according to Carolyn Morrow Long, records indicate Marguerite and her daughter Catherine, age two, were listed in the property inventory of a white Creole named Henry Roche (aka Belaire) in 1756. Catherine’s father is listed as a black man named Jean Belaire, about whom nothing further is known (Long 2016). He may have also been a slave of Henry Roche, as evidenced by the last name of Belaire. Slaves often took on the last name of their master since they were considered property and not recognized as having identities of their own.

Catherine, Marie’s grandmother, grew up in Henry Roche’s household and it is believed he fathered Catherine’s mix-raced children. One of those children would become Marie’s mother, named Marguerite, after her great-grandmother. Although I have never read it written this way, I think it is important to note that her children could likely be the product of rape, a common act of power and violence perpetrated by slave owners. Women were viewed as property, and sexual abuse and exploitation were rampant:

Throughout the period of slavery in America, white society believed black women to be innately lustful beings. Because the ideal white woman was pure and, in the nineteenth century, modest to the degree of prudishness, the perception of the African woman as hypersexual made her both the object of white man’s abhorrence and his fantasy. Within the bonds of slavery, masters often felt it their right to engage in sexual activity with black women. Sometimes, female slaves acquiesced to advances hoping that such relationships would increase the chances that they or their children would be liberated by the master. Most of the time, however, slave owners took slaves by force. (Hallam 2004).

The nature of Catherine’s pregnancy is further questioned by the fact that Catherine Henry “was at most thirteen years old when she gave birth to Marguerite, her first-born, who in turn was also at most thirteen when she had her first child. This calculation also indicates that Marguerite must have been born in the year 1783” (Fandrich 2005, 11). Coupling this probability with the fact that all of Catherine’s children were born in bondage and she was sold and separated from them by unsympathetic owners further drives home the evidence of trauma. That Marie Laveau comes from this traumatic past with no one ever acknowledging it in such terms is tragic. She shares a common history of many African Americans in this country who descend from slaves. Let’s call it what it is, acknowledge the intergenerational trauma she likely inherited, and pray for her mother, grandmother, and great-grandmother so that the Laveau family lineage may heal from their traumatic past. After all, so many people go to Marie for their own healing. How many do you think ever pray for hers? 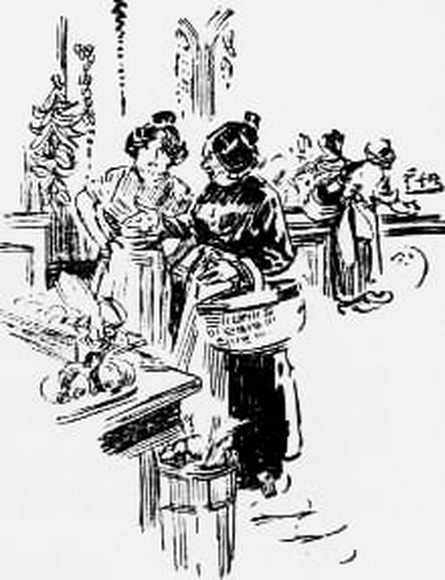 Marie’s grandmother Catherine is listed in the city records as a marchande, a purveyor of merchandise or foodstuffs that would have ranged from red brick dust to calas (a Creole fried rice pastry). After being sold by Henry Roche, Catherine ended up with two additional slave owners, until she ended up with a fourth in 1784, a free woman of color named Francoise Pomet. After eleven years with Pomet, Catherine was able to save up enough money to buy her freedom. In 1795, she paid $600 for her freedom and took Henry as her surname. She became a successful businesswoman in the marketplace, bought some land, and had the well-known house on St. Ann Street built between Rampart and Burgundy. 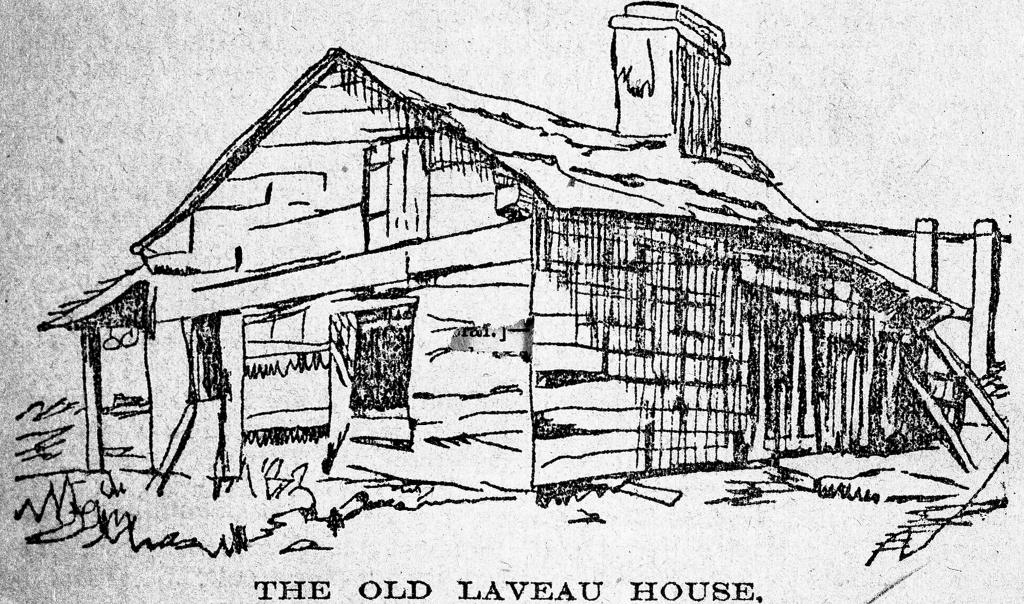 In 1790, Catherine’s daughter, Marguerite Henry, was freed by her owner. She subsequently had several children with a Frenchman named Henri Darcantel, but he was not Marie’s father. As a result of a brief relationship with a successful businessman named Charles Laveaux, Marie Catherine Laveaux was born on September 10, 1801. Marie’s father, Charles Laveaux, though not acknowledged on her birth certificate as such, did acknowledge Marie as his daughter in numerous later documents (Fandrich 2005). Incidentally, Charles’s mother was also named Marie Laveaux. It is worth noting that the prevailing narrative in the Laveau legend describes Marie’s father as a wealthy white planter, but this is not the case. He was a highly successful free man of color in the business of real estate and the slave trade. While Charles Laveaux’s own father is not listed on his birth certificate either, it is likely he is descended from Charles Trudeau dit Laveaux II (1743–1816), a white Creole who was the surveyor general of Spanish Louisiana from the early 1780s until he resigned in 1805. 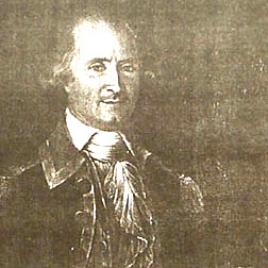 Charles Laveau Trudeau
Six days after her birth, Marie was baptized by Father Pére Antoine into the Catholic faith at St. Louis Cathedral in New Orleans. Her grandmother Catherine took on the role of godmother to Marie. Her godfather was a Spanish man by the name of José Joaquin Velasquez, who was apparently the go-to guy when a slave or free person of color was in need of a godfather (Long 2006). Marie Laveau’s baptismal certificate, which was writtenin longhand by Father Pére Antoine, states:

Maria, free mulatto—On this day, September 16, 1801, I, Fr. Antonio de Sedella, Capuchin Religious, Priest of the sanctuary of the Holy Church of the Cathedral of this city of New Orleans, baptize and give the holy oils to a girl child, free mulatto, who was born on the tenth of this month, daughter of Margarita, free mulatto, and an unknown father; I have exercised the sacred ceremony for this girl who received the name Maria; her godparents are José Joachim Velasquez and Catarina, free Negro, who will serve as her spiritual parents. Confirmed by Fr. Antonio de Sedella.

Credit for the discovery of Marie Laveau’s birth and baptismal records goes to researcher Ina Fandrich, who, after fifteen years of searching, discovered them in the archives of the Archdiocese of New Orleans in 2001. Now that we have access to the documents, we can debunk two persistent myths that are part and parcel of the Laveau legend: 1) that she was nearly one hundred years old at the time of her death (she was seventy-nine); and 2) that she was born in Haiti (she was born in New Orleans). Nevertheless, in antebellum New Orleans the average life expectancy was twenty-something, and given Marie lived for nearly eighty years and spent her time helping people suffering from numerous plagues, it is understandable that she was assumed to have lived to the ripe old age of one hundred.

Unfortunately, there is scant information about Marie Laveau’s childhood. She is believed to have grown up in Catherine’s St. Ann Street cottage. On August 4, 1819, at the age of seventeen, she married a free man of color by the name of Jacques Paris, a carpenter by trade from San Domingue, (a French colony in what is now present-day Haiti). According to the Daily Picayune obituary from June 17, 1881, Marie’s marriage to Jacques Paris took place at the St. Louis Cathedral with Father Pére Antoine presiding and a lawyer by the name of Adolphe Mazureau reportedly standing in as witness. The obituary also states that she was twenty-five at the time of her wedding and that she was ninety-eight at the time of her death, which we now know is incorrect. Equally important, the attorney Mazureau did not start practicing law until 1830, nor was he “among the witnesses that are named in the actual marriage record in the St. Louis Cathedral archives” (Fandrich 2005, 304).

Mazureau did manage to find his way into the Laveau legend, however, as “a man of brilliant eloquence and dissolute habits . . . a favorite of hers, it being said by some that he was one of the most ardent of her youthful lovers (Staunton Spectator and General Advertiser 1881).
According to local lore, Jacques and Marie were given a house on the 1900 block of North Rampart Street in the Faubourg Marigny by her father, Charles. Her father is also said to have given her the famous gold hoop earrings she is said to have worn as a wedding gift. Though it was long assumed that Marie and Jacques did not have any children, there are two entries in the St. Louis Cathedral baptismal records that indicate otherwise. One daughter named Marie Angèlie Paris was born on November 27, 1822, a “free mulatto” and legitimate child of Jacques Paris and Marie Laveau. A second daughter named Felicité Paris is recorded as baptized on November 17, 1824. She was said to be seven years old, the daughter of the late Jacques Paris and Marie Lilavoix, an apparent spelling corruption of Laveaux (Long 2006). Felicitè would have been born in 1817 when Marie was just sixteen years old, and two years prior to her marriage to Jacques Paris. What became of these two daughters is unknown; according to Long the St. Louis Cathedral funeral records for the years 1825 to 1829 have been lost.
Jacques Paris disappeared in 1824 and was presumed deceased, although documentation of his death or internment has never been located. The rumor mill suggests he went back to San Domingue, or that he signed a contract to be a merchant marine and was swept overboard. Others say he died in 1822 but wasn’t in New Orleans at the time of his death (Gandolfo 1992). Whatever the case may be, Marie became designated in official documents as La Veuve Paris, or the Widow Paris.
About a year after Jacque’s disappearance, Marie entered into a plaçage relationship with a wealthy white man named Louis Christophe Dominique Duminy de Glapion. Captain Glapion served with distinction during the war of 1815 as ordinance officer in the Battle of New Orleans under Andrew Jackson in the Ninth Native Regiment. Plaçage arrangements were commonplace among free women of color during her era due to Louisiana’s anti-miscegenation law. Since interracial marriages were illegal, these types of arrangements allowed for white men to enter into long-term relationships with women of color, set up households, and provide for their care. While legend says they had fifteen children together, Marie and Christophe had just seven children from 1827 to 1838: Marie Eloise Euchariste, Marie Louise Caroline, Christophe, Jean Baptiste, Francois, Marie Philomene, and Archange. Only Eloise and Philomene survived to adulthood. Marie Philomene reportedly became her mother’s successor in the world of New Orleans Voudou and is known as Marie Laveau II and Madame Legendre. Christophe died on June 26, 1855. It was said that after Christophe died, Marie turned to the Church more than ever before for consolation. Not only did she increase her own devotion, but she brought others into its fold as well.