One of the ways in which the Spirits are served is with offerings of food. Some of the food offerings are simple, like fresh fruit, while others are more elaborate like gumbo. Each Spirit has its own favorite offerings and these offerings have what is referred to as ashé in the African-derived traditions. Ashé is life force, power, prana; there are many ways to describe it and each culture has its own unique descriptor of it. In fact, everything and every action has varying degrees of ashé - whether it is lighting a candle or incense or preparing food for the Spirits.

In New Orleans Voudou, our loas and saints have their favorite dishes that serviteurs take care to provide when inviting the Spirits into their lives for assistance. Much care goes into the preparation of the food as the preparation of the food is considered part of the ritual – it is a magickal act. The food is prepared and offered on the altar and after the ceremony the food is shared among participants while a portion is reserved for the Spirits themselves.

Following is a collection of recipes that are staples in Creole cuisine and can be made as offerings to Marie Laveau. I have included dishes that are historically part of the Marie Laveau legend as her favorites. Some are old recipes for dishes made and served to the sick and infirm. Marie Laveau would have likely served some of these dishes herself while nursing her patients back to health. Whether you are a Laveau devotee or not, you are sure to enjoy these classic Creole dishes.

There are several stories that claim to be the origin of Congris or red beans (or black beans) and rice, depending on who you talk to and where you are in the South. A dish typically credited to be Cuban in origin, it is likely traced to the slaves who brought the tradition of eating a variety of beans with them to the New World. According to some spiritualists, Congris is prepared on Sunday evenings as an offering to the powerful Indian Spirit Saint Black Hawk. However, as red beans and rice, it has been a custom for many years to prepare on Mondays, when this was the day for washing clothes during plantation days. A low fire was kept for washing throughout the day which made it convenient to slow cook the beans over the fire along with the clothes.

Heat oil in heavy large skillet over medium-high heat. Add onions, bell pepper, garlic, cumin and oregano and sauté until onions are beginning to brown, about 5 minutes. Stir in beans and rice; cook until heated through, about 5 minutes. Season with salt and pepper. Yields 6 servings. 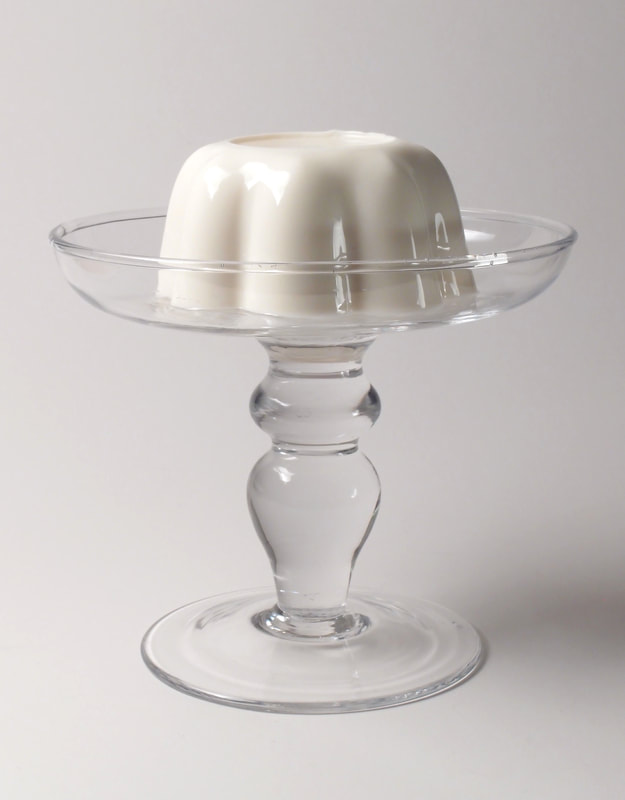 A serving of blanc-mange in the style of French cuisine, made according to a rather purist recipe, containing only almonds, water, milk, sugar and gelatin. Photo by Skopp, CC BY-SA 3.0.
Blanc Mange, meaning “white dish” has uncertain roots, but was a mainstay in French cuisine in Marie Laveau’s day. It was made and poured into a mould and then served, but it could also be made and simply served in a bowl like a sort of porridge. Blanc Mange was a dish served on festive occasions and even dyed different colors. It was also a mainstay as sustenance for the sick and infirm as it is easily digested and filling.
Ingredients
Boil one quart of milk, season it as to your taste with sugar and rose water, take four tablespoonfuls of the rice flour, mix it very smooth with cold milk, add this to the other milk while it is boiling, stirring it well. Let all boil together about fifteen minutes, stirring occasionally, then pour it into moulds and set it aside to cool.
FAQS