Marie Laveaux was of remarkable intellect and force of character. She  had no equal and cared not whether the men and women she aided were old in coquetry and vice or young and innocent. ~ Richmond Daily Palladium 1900

Marie Laveau were alive today, I truly believe she would be at the forefront of the #MeToo and #BlackLivesMatter movements. I envision her standing in front of the White House as a #SisterResister, protesting the current administration’s racist policies, and attacks on health care and the environment. Instead of Alyssa Milano, it could have been Marie Laveau sitting behind Brett Kavanaugh at those now infamous SCOTUS hearings that mobilized the female warrior aspect of the country like never before. She would be advocating prison reform, laying the gris gris down at the border for those seeking a better life or in need of asylum, and making sure no one forgets that there are children held in cages in internment camps for brown people right now, at this present moment, in post-slavery America.

But the reason she would be doing these things might surprise a lot of people who are unfamiliar with her as a living, breathing human being. Marie Laveau is no myth; she is no mere legend. While her reputation precedes her as the notorious Voudou Queen of New Orleans, in reality, she was a free woman of color who ruled the city during antebellum New Orleans. This was no small feat. She was a devout Catholic, an independent businesswoman, a mother, and healer who lived her life in accordance with the corporal works of mercy. Stories abound about her magickal prowess, freeing men from the gallows and healing the sick from the brink of death. Her belief in Catholicism guided her life as well as her magick in such a distinct way that people from all over the world are inspired by her spirit and her story. This phenomenon is evidenced by the fact that her grave site is purportedly one of the most visited pilgrimage sites in the United States, second only to the King of Rock and Roll, Elvis Presley.
So, how does one begin to describe the legacy left by a legend? If the power of a person’s life is in the stories they leave behind, then Marie Laveau has the market cornered as the most storied woman in the history of New Orleans.

Marie Laveau has influenced New Orleans culture in at least three distinct ways: 1. Her name is embedded in the tourist industry and remains a prime attraction in that context,  2. She is the subject of a whole body of folklore associated with the city, and 3. She is remembered through her magickal and spiritual legacy which is most easily seen in the commercial Voodoo and Hoodoo sector.
First, the Voudou Queen’s presence is obvious to anyone visiting the French Quarter in New Orleans. Shops are named for her, products are crafted bearing her name, ghost tours include her cottage and grave site, and practitioners take on her last name whether or not they possess any biological ties to her. Much to the chagrin of Christian adversaries, her name alone drives much of New Orleans’ tourist industry. Her reputation for innovation and entrepreneurship, as well as her overall business acumen, served to fuel a niche market for herbalists, diviners, ritual performers, and Hoodoos that didn’t exist before New Orleans was graced with her presence.

This hybrid commercial/spiritual space did not come without a price, however. The local police routinely harassed Laveau, but she kept them at bay with the mere threat of her conjure. And journalists often mocked the Voudous in local newspapers with the most salacious stories going viral the old-fashioned way, copied and redistributed in newspapers around the nation. Nonetheless, Marie Laveau excelled at navigating an oppressive, racist society. She walked gracefully as a Christian, just as easily as she danced with Li Grand Zombi, the sacred serpent.
Second, Marie Laveau is at the center of New Orleans’ folklore. Her spirit can be seen in and around the city, flying over graves, dancing in cemeteries, walking down streets in the French Quarter and haunting local shops. Take the story about Elmore Lee Banks, for example, who reportedly saw Marie Laveau’s ghost one day in the mid-1930s near St. Louis Cemetery No. 1. As Banks recalled, an old woman dressed in a long white dress and wearing a blue tignon came into the drugstore where he was a customer and stood next to him. He had been telling the drugstore owner what he needed when he noticed the owner became bug-eyed and “ran like a fool into the back of the store.” Not knowing what was going on, Elmore turned and looked at the old woman, who started laughing and laughing. Finally, the woman asked, “Don’t you know me?” Elmore replied, “Why, no ma’am. Where did the drugstore man go?” Apparently, that was the wrong answer, because she suddenly slapped Banks upside the head. According to Banks, she then “jumped up in the air and went whizzing out the door and over the top of the telephone wires. She passed right over the graveyard wall and disappeared. Then I passed out cold.” Banks said he was awakened to whiskey being poured down his throat by the proprietor, who told him, “That was Marie Laveau . . . she been dead for years and years but every now and then she come up in here where people can see her. Son, you just been slapped by the Queen of the Voodoos!” (Tallant 1946, 130–131).
Third, Marie Laveau left a very specific legacy in her magick and spirituality. Yes, she has achieved rock star status in death, inasmuch as a Voudou Queen can achieve that status, but if we look at how she lived her life, she seemed to be more concerned with serving the people in her community than seeking recognition or fame. Evidence of her spiritual legacy can be seen in untold accounts written over the years of rootdoctors claiming to be descendants, relatives, or apprentices of Marie Laveau. They each profess unequivocally that the Hoodoo they do was the Voudou she did. Her legend is “kept alive by twentieth-century conjurers who claimed to use Laveau techniques, and it is kept alive through the continuing practice of commercialized voodoo in New Orleans” (Salzman, Smith, and West 1996, 3:1581). It is also kept alive through hybrid truth/fiction storylines found in books such as The Voodoo Queen and Voodoo in New Orleans by Robert Tallant. Writers and academics continue to rely on these storylines as primary sources of information. A participant in the Louisiana Writers’ Project during the 1930s and ‘40s and one of Louisiana’s best-known authors, Robert Tallant (1909–1957) had access to numerous interviews by people who knew Marie Laveau or were alive during her lifetime. Instead of adhering to facts in his books, he sensationalized much of the material and transformed it into popular novel format. His choice to do so influenced the Laveau legend perhaps more than any other single factor. 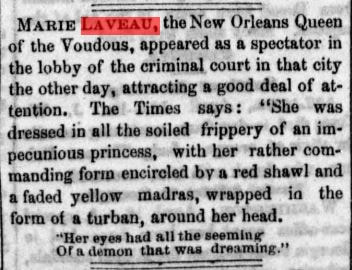 In the past ten years, thanks to the impeccable research of Carolyn Morrow Long, Ina Fandrich and others, we have more facts from which to build a more accurate picture of Marie Laveau’s life. With each dot that is connected in her genealogy, and as more facts are substantiated, the more human she becomes. For devotees, the more elevated she becomes. As Zora Neale Hurston stated, “There is very little contemporary record of her, but her glory has not suffered with the passing of time” (Hurston 1931, 326). Her life has been explored, examined, and reimagined; and while the work on the level of the mundane moves forward, so does her spiritual devotion. As her energy is amplified and her spirit is elevated, her legacy is embraced globally as devotees set up shrines to her around the world, as far away as Australia, Canada, Great Britain, and the Netherlands.
Tallant’s writings, along with first and second-hand accounts of Voudou ceremonies written by those who excelled in the kind of salacious writing characteristic of the National Enquirer, became part of the Laveau legend. Stories about wild sexual orgies and sacrificed black cats were recounted repeatedly in newspapers and books, while frenzied crowds of naked people were said to have fallen under Marie Laveau’s evil Voudou spells. Marie and her Voudou religion were often demonized by an unforgiving press while others acknowledged her charity work and viewed her as a saint. When she attended a court hearing in 1873, for example, the newspaper described her as “dressed in all the soiled frippery of an impecunious princess” whose “eyes had all the seeming of a demon that was dreaming” (The Daily State Journal 1873).

Clearly, the propaganda of the 1800s fueled the public perception of Voudou leaving us with a lack of factual information about Marie Laveau’s life. One of her obituary’s states, “The secrets of her life could only be obtained by the lady herself, but she would never tell the smallest part of what she knew” (Boston Daily Globe 1881). She did not write, so we have nothing of hers to read. What we have is oral tradition, old newspaper accounts, and interviews with elderly folks fifty-plus years away from her death. Moreover, she never had her photo taken despite rumors of an extant photo, so we have never seen what she truly looks like. On this issue her daughter, known as Madame Legendre stated, “After her death an artist came and asked me to let him draw her . . . he wanted to copy some photograph . . . I told him she never had any taken nor ever been sketched” (Times Picayune 1886). As a result, a famous painting by Frank Schneider (a copy of the original by George Catlin long since lost) that hangs in the Cabildo in New Orleans became the most popular representation of Marie Laveau. But, those who actually saw her dispute this rendering. Alberta Jefferson, one of Marie Laveau’s childhood neighbors, described Marie as “a tall, thin, very pretty woman who wore her hair dressed with curls falling on her shoulder and never wore a headdress or tignon” (Breaux- McKinney 1937). Other descriptions of Marie range from the New Orleans Republican’s “weird, mysterious looking being” to New Orleans’ journalist George William Nott’s “Voltairian look.”
The Birth of a Queen